This year our Welsh Night concert proved as popular as ever, with an enthusiastic audience present to watch our choir get our 2016 concerts calendar off to a splendid start. 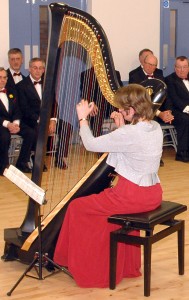 The choir was in excellent voice as it performed a varied programme, which ranged from Welsh hymns such as Morte Christe and Llanfair to a Cole Porter Medley, and an arrangement of the popular Welsh folk song All Through the Night. To round off the evening, in the final section of the concert the audience and choir joined forces in a spirited rendition of some traditional Welsh songs and the Welsh national anthem.

Compere for the evening was Glyn Thomas, whose good humoured presentation added to the entertainment, and for the second consecutive year we were delighted to be joined by harpist Penny-Robin Riddering, who gave us a most accomplished performance.

As if all that were not enough, both audience and performers were treated to a veritable feast when the refreshments were served up during the interval. Quite the tastiest Welsh cakes and bara brith we have ever eaten, courtesy of members of our ladies committee. Our grateful thanks to them, and to our musical director Vivian Redfern, and accompanist Mike Ward.

The image on this page was taken at our 2015 Welsh Night concert, and was provided by choir member Ian Dunning.