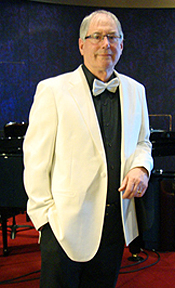 Michael was born in Northamptonshire and studied piano and violin locally before going to the Royal Academy of Music and London University with the piano and organ as his main studies. He also composed works for two pianos and a number of string quartets which were performed in London and sang in choirs that performed in the Dukes Hall and the Royal Albert Hall. He met his wife Jo while they were studying in London and they have three children.

A busy teaching career specialising in music and the performing arts saw Michael producing performances of musicals and opera and conducting choral works ranging from Handel to Britten. In the 1970’s Michael was the producer for Albrighton Operatic Society and was responsible for a number of productions ranging from Gilbert and Sullivan to My Fair Lady and The Boy Friend while at the same time working for a Masters degree in education at Birmingham University which was awarded in 1985. Michael moved to Hampshire for his first Headship at a newly formed secondary school in Southampton and six years later he was appointed as Head teacher of another secondary school in Basingstoke. The demands of these jobs meant that his musical activities had to become purely recreational and confined to the home although he did accompany pupils and staff in concerts and productions at his school and at an exchange High School in Long Island, New York. Michael retired from teaching in 2000 after sixteen years of secondary school Headship but was asked by Hampshire to accept the post of Consultant Inspector specialising in home education in the county, a job he enjoyed on a part-time basis for a further five years.

Michael moved back to the Midlands at the beginning of 2006 where he has been able to resume his musical activities despite becoming involved in local government. He is currently the Clerk of Albrighton Parish Council. He became the official accompanist of the Newport and District Male Voice Choir in July 2009 and he is very much enjoying his involvement with the Choir and returning to his musical roots.